I have a customer evaluating the TPS2553-1 (latch-off version) for one of their projects.

The Datasheet, and the information I have been able to confirm, seems to suggest the same thing written on page 17 of the DS.

"The latch-off devices (TPS255x-1) assert the FAULT flag after the deglitch period and immediately turn off the device."

My understanding was that for the following setup and latch-off operation:

- The device is operating normally with an input of 5V, and the current limit set to 1.7A.
- Output voltage is 5V, and only 10's of mA
- All of a sudden there is a short on the output (Rload = 0Ω）
- The TPS2553-1 catches the rising current, and limits to around 1.7A
- This continues for the deglitch time of xFAULT going low (typically 7.5ms, MAX 10ms)
- If the overcurrent condition persists after deglitch time, xFAULT goes LOW and internal N-Ch MOSFET is shut-off (gate goes to 0V I guess)

So you would expect the shutdown to happen MAX 10ms after overcurrent condition is detected.

Now, if everything was the same and the load was 2Ω, the output voltage would be a little higher (Vout = 1.7A * 2Ω) during the 1.7A current limiting operation, but the xFAULT deglitch time is the same, and so the time before the device shuts off should also be no more than 10ms. Same as above.

Is this understanding correct?

The problem is the customer is seeing operation similar to thermal shutdown.
For 0Ω, they see the output being shutoff after about 10ms, while for 2Ω they are seeing 28ms before shutdown...

This is what is seen in the time to shutdown in the below figures.
I am asking the engineer for their xFAULT waveform if possible as well. 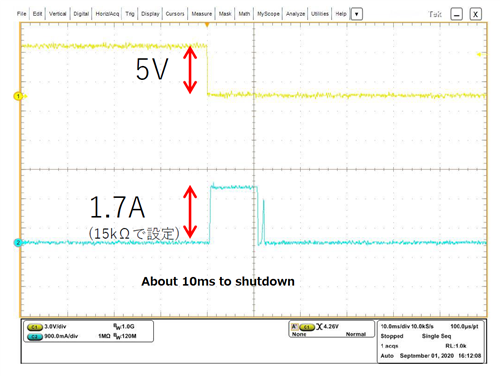 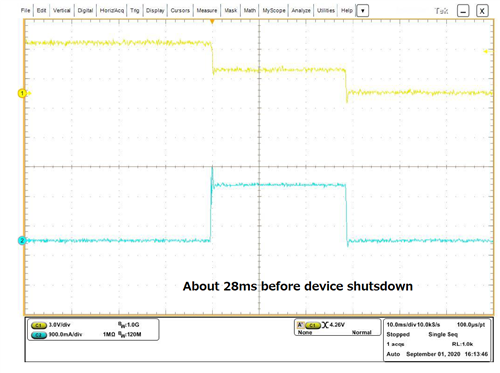