I hope you are doing well.

So I am using the TPS63020 as a boost converter to power an LTE/4G module. Here are the parameters:

The DCDC works fine at the beginning, consumption around 20 o 30mA. But once the RF module starts searching for network, resulting in a higher current consumption, the output becomes very unstable, drops very often for very short periods of time (the red diode on PG blinks)

Also, a second anomaly is that the current consumption peaks up to 700mA which it never done before using another board and power supply.

And I have no idea why. I mostly followed the values indicated by the WEBENCH tool, so I don't really think it is an inductor problem. Maybe I am missing something in my design?

Here are the schematics and Layout: 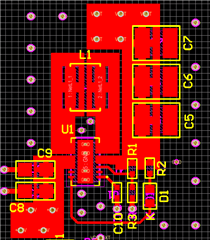 Can someone please help?

PS: Could the value of the resistor on PGOOD be part of the problem? I see values of 100k, I only put 2.2k with mu LED on PG.