I'm trying to setup the BQ34Z100EVM for use with a 24V SLA string, but have run into several issues with the software. I'm using bqStudio version 1.3.101.1, which I believe is the latest stable build. I started with the quick start guide (SLUUBV2), and didn't have any issues there. Updated the EV2400 firmware to 0.28. Then I went on to follow SLUU904A, and problems start occurring at the Chemistry Screen section (section 3.4).

I tried to update the chemistry version via the GASGAUGECHEM-SW. Initially I downloaded ChemicalUpdater-876-windows-installer.exe but got this error message

Couldn't get that message to go away, even by reinstalling bqstudio or running as admin. So I instead downloaded ChemUpdate876.zip, and installed that via Help > Update Chemistry. Now bqstudio indicates I have Chemistry version 876, which I assume is the latest. The chemistry ID most similar to my batteries (a similar looking pack from Sigmastek, 18Ah instead of 17Ah) is 0809, so I select that and click "Program Selected Chemistry," and get this window:

I've seen many other e2e threads about this message, but none explain what it actually means, and none of the replies have helped me much. But despite the message it seems to have at least changed the CHEM_ID. Here is what some of the various commands return in the log panel: 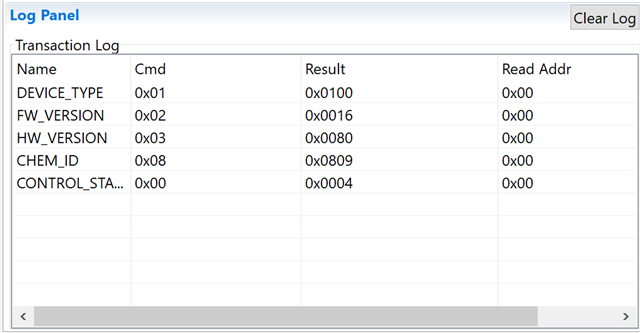 So next I try section 3.5, the programming screen. The first step is "Search for the .srec file using the Browse button," but does not say where to look for the file, and I'm unable to find any existing .srec files anywhere.

Eventually I tried creating output files via the Golden Image tab, and I successfully create .srec, .bq.fs, and .df.fs files. I go back to the programming tab, select the new .srec file, click Program, and it says "Operation executed successfully" in the bottom left. Next I click "Execute FW", but the bottom left message says "Failed to execute Firmware - No acknowledge from device." I follow the advice in this thread and can successfully read some bytes with I2C address xAA, which I suppose is good.

So at this point I've made several deviations and wanted to ask a few things before I proceed.

1. Are the "target bqz container is old" and "Failed to execute Firmware - No acknowledge from device" messages just bugs in bqstudio which should be ignored?

2. I'm concerned about the .srec file I created and uploaded; doesn't feel like a "Golden" image if I created it while deviating from the normal steps. I feel like there was supposed to be a real Golden .srec file that shipped with the bqstudio install, or would be downloaded from the BQ34Z100 webpage, but I still can't find one.

3. I've been doing this all with the EVM powered from a 4V DC supply. If my battery is not an exact match for an existing battery in the CHEM_ID list, what things should I do before trying this out with my actual battery? As far as I can tell, mine is similar to the YUASA NPH_18 I've selected, except my packs are specced at 18Ah, and I want to use two packs in series.