In our project, we are using your AM64x SKEVM boards. For development purposes, we need to use BOOT over Ethernet functionality.

As a reference image for testing I'm using your default image available in SDK from the site:

After preparing the DHCP server and TFTP server with the configuration proposed by TI from :

This is what I get: 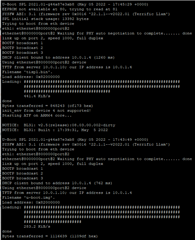 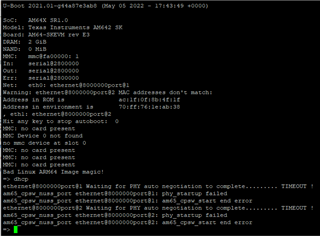 While building my custom version of u-boot, I noticed that the device tree included in tispl.bin and tiboot3.bin files is slightly different from the one which is attached to u-boot.img.

This includes file is a part of tiboot3.bin and tispl.bin  and overlay cpsw3g  node as below.

After a deeper check,It looks like device tree k3-am642-sk.dts which is included in Uboot.img is the same device tree that is given during kernel initialization. After booting the kernel with this device tree, both ethernet ports work properly. However, they do not work at u-boot.img stage.

Question:
1. Does the AM64X-SKEVM board support full boot over eth? If so, can you help me to achieve this?

Thanks for your time.