[FAQ] DRV5011: What is the difference between using Hall-effect latches for rotary encoding and motor commutation?


On the surface rotary encoding and motor commutation seem very similar because they both involve sensing the position of a rotating magnet and sending that information back to the system. Hall-effect latches can be used for both of these applications but they have some fundamental differences in how they interact with the system.

In rotary encoding, a magnet is placed on a rotating shaft and Hall sensors are placed around this magnet. Two single-axis latches, like the DRV5011 or a single 2-dimensional latch, like the TMAG511x, can be used to get speed and direction measurements of the magnet. This information is not used to control the speed or direction of the motor or rotating shaft and is only for approximating its position.

For motor commutation, the figure below shows a simplified model of a BLDC motor. In this simplified model the rotor is made up of a single pole pair magnet, meaning that it has one north and one south pole, and three coils. The three coils, also known as the stator windings,  are attached to the motor stator and fixed in a set position.

The magnet is permanently fixed on the rotating part of the motor and the coils are fixed on the stationary part of the motor. When current is injected into the coils, they have the same behavior as either a north or south pole depending on the direction of the injected current which creates an electromagnet. The rotor is moved by exciting at least two electromagnets in the motor assembly. They are excited in such a way that the field created by one of the coils will attract the permanent magnets located in the rotor towards the stator windings, while another coil will repel the magnets towards the other phase, thereby producing torque. 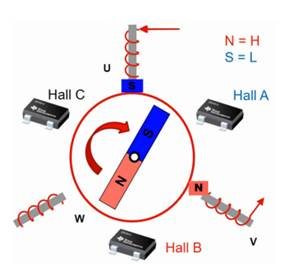 This method requires you to know the rotors positions throughout its 360 degrees of rotation. We can achieve this by using three Hall-effect latches to track the position of the magnet on the rotor in each phase of the rotation. This information is used by the motor driver to determine which coil needs to have current injected into them to maintain or change the course of the motor. 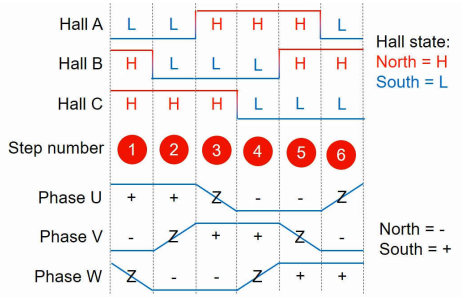 To summarize, rotary encoding uses Hall latches approximate speed and direction based on a magnet attached to a rotating shaft. Hall-effect latches used in rotary encoding do not have an effect on the speed of the motor or rotating shaft. Motor commutation typically occurs inside the motor, the information collected by the hall latches is used to actively track the rotors position. This information is provided to the motor driver and can have a direct impact on the performance of the motor.