TS3A24159: High leakage current on the out pin that is not selected

The device is connected as follows: (drawing one of the two switches for simplicity) 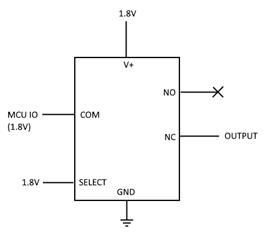 The issue is that when the SELECT pin is HIGH, and the IO is HIGH I see voltage on the output (which should be disconnected from COM at this state)

At first the output was not connected to anything but the voltmeter and I measured up to 600mV (at 25C).

I tried adding a pull-down resistor (100KOhm) to ground, and I measured 10mV (which might be considered fair),

but when testing in high temp. (80C) the output voltage with the 100kOhm PD was measured up to 130mV.

Quick calculation shows that it means 1.3uA is flowing through the NC pin which is much more than anything stated in the datasheet.

(I got the same results on 3 similar circuits)