Hi there, I've been attempting to flash a standalone CC3220MODASM2MONR chip on a simple breakout PCB we made, but have been running into a few problems. We're attempting to flash the standalone chip over UART by using the procedure described in the Production Line Guide, which uses the Launch-CC3220MODASF as an intermediary board (see image below).

We have these jumpers on the launchpad removed: GND, VBAT, RX, TX, RST. The top pins shown in green in the image below are being used to connect to the standalone chip. VBAT is being used to as a power source for the chip and the SOP pin pullup resistor, and the chip's breakout board and SOP pulldown resistors are grounded via GND.

Our UART connections between the Launchpad and breakout board are set up like this:

Our SOP pin external pullup/pulldown connections are set up like this: 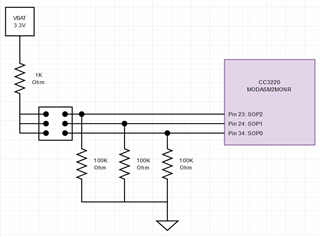 I realize we've been somewhat making stabs in the dark with our flash attempt configurations. It's been a little difficult to understand the correct and exact process we should be going through to properly flash our standalone MCU. Any help in answering the following questions would be wonderful.

1. Are our hardware connections correct?
2. What SOP pin configuration should we be using? From the Production Line Guide, it says we should be using (1 0 0) for UARTLOAD or (0 1 0) for UARTLOAD_FUNCTIONAL_4WJ. Does it matter which one?
3. What device should we be selecting in Uniflash?
4. I've read in this post that both the CC3220SF and CC3220S modules require external flash chips.
https://e2e.ti.com/support/wireless-connectivity/wi-fi-group/wifi/f/wi-fi-forum/903843/cc3220moda-cc3220modasf12monr-vs-cc3220modasm2monr
We currently do not have any external flash, just whatever memory is included in our CC3220MODASM2MONR chip. Will this cause any issues in the flashing process? Should we perhaps consider switching to the    CC3220MODASF12MONR?
5. What project file should we be using to create our image from? I've been attempting to use the "Programming.sli" file so far located in a project's MCU+Image\syscfg\sl_image\Output path.
6. Any other ideas for how we can troubleshoot our flashing setup?

Thank you very much for any help!