This inquiry is actually related to my previous post below

Issue overview: ZED and ZC binding were successful and data packet were sending and receiving normally at first

We finally managed to reproduce the issue.

ZED and ZC binding in EZ-MODE. In the beginning, the data packets were sending and receiving successfully.

Zigbee connection lost occurred, the simplified data packet events were as in attached image below. 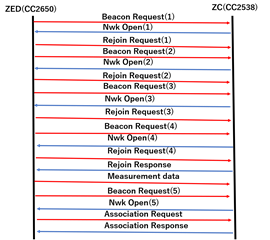 ZED sent Rejoin Request for 3 times but there was no response from the ZC,

when finally at Rejoin Request (4) there is a Rejoin Response from ZC but ZED only sent measurement packet once then connection became lost again .

ZED config file (f8wconfig.cg) is as below:

・In what kind of situation does ZED usually send Association Request? Will ZED send it when the network key is unavailable?

・Is there any method to detect in both ZED and ZC when the network key is deleted?

・Can we increase the number of retry for Rejoin Request?

Any help would be appreciated .