Amp up your cans: How much power do headphones need? (Part 1)

When we set out to create an operational amplifier (op amp) for headphone applications (which became the OPA1622 op amp), one of the first questions we needed to address was just how much power headphones need.

Think of headphones and loudspeakers as a transformer that converts an input electrical power to acoustic output power. Like all processes, this conversion of electricity to sound has an efficiency associated with it. And as you might expect, different headphone styles have different efficiencies. In general, over-the-ear headphones have lower efficiencies than in-ear headphones.

In Equation 1, PIN represents the input power to the headphones, and η is the efficiency given at a 1mW reference level. Figure 1 shows the output SPL for increasing input power for a range of common headphone efficiencies. 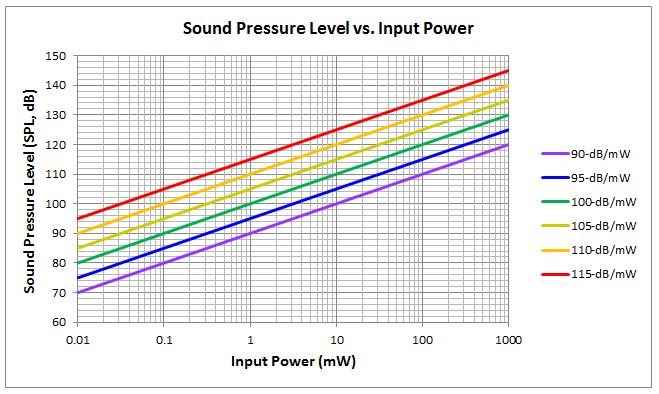 Equation 1 and the plots in Figure 1 include the assumption that the drivers in the headphones are operating in a linear fashion. Of course, you can’t keep increasing the input power to the headphones and expect the output SPL to increase forever (don’t try). At high input powers, nonlinear effects in the drivers themselves will limit the maximum SPL.

Once you’ve established a target SPL goal, determining the signal levels only requires some fundamental electrical engineering equations (Equations 2 and 3):

Both of these equations include the nominal headphone impedance, RHP, also given by headphone manufacturers. Headphones designed for portable electronics have low impedances (as low as 16Ω) because  a low voltage signal at the headphones will still deliver sufficient power. Headphones not intended for portable applications, such as those used in professional recording studios, may have impedances as high as 600Ω.

Let’s apply all of this information to a design example, calculating the signal voltage and current necessary to reach a certain SPL for a popular pair of over-the-ear planar-magnetic headphones. Table 2 lists the design goals and headphone specifications.

Using either Equation 1 or Figure 1, first determine the necessary input power to reach your SPL goal:

Next, calculate the voltages and currents required to deliver this amount of power to the headphones:

The combination of a low-impedance headphone with low efficiency and a very loud maximum SPL goal in this design example illustrated to our team the challenges ahead in the OPA1622 design. It was apparent that the amount of current our amplifier would need to deliver to some headphones would be significant (by op amp standards). With this in mind, we turned our focus to the output circuitry of the OPA1622. It would need to be capable of delivering large amounts of current without distortion

In the next three installments of this series, we’ll examine some of the other challenges we encountered in headphone applications, and how we overcame them in the design of the OPA1622.