In Part 2 of this series, I explained a serial interface in which a conversion result for sample S is transferred to the host controller after the conversion is complete but before the start of the next conversion. I also noted that with this type of interface, both the throughput and response time of the analog-to-digital converter (ADC) degrade when using lower clock speeds.

Interface type 3: Data bits are transferred when the ADC is converting for the next sample

In such ADCs, the conversion result for sample S is transferred to the host controller when the ADC is converting for sample S+1.

Figure 1 shows such a serial interface.

The equations show that a SAR ADCs employing a type 3 interface scheme will also have a restriction of minimum clock speed to achieve the desired throughput.

As an example, let’s use a hypothetical 18bit/1MSPS ADC with a conversion time of 710ns.

To achieve the same 1MSPS throughput, the type 2 interface required fCLK > 62MHz! The type 3 interface meets the same throughput requirements at less than half the clock speed.

Clearly, the type 3 interface is more user-friendly, unless we’re missing something.

What about the response time? From the diagram, it is also clear that:

Table 1 compares the throughput and response times of type 2 and type 3 interfaces: 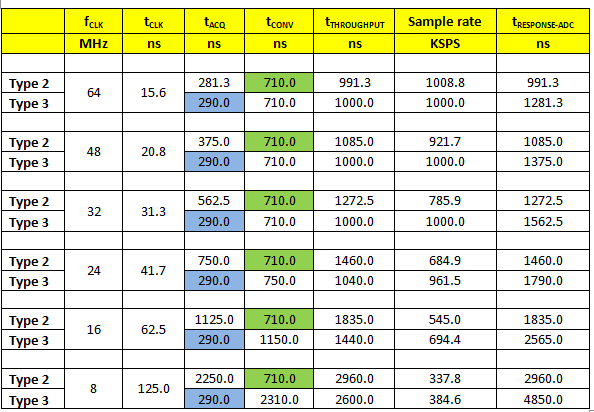 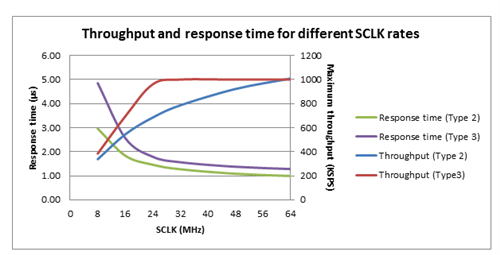 In my next blog post, I’ll give some tips on which interface is more suitable for particular applications.

Learn the differences between the resolution and accuracy for an analog-to-digital converter (ADC) in a blog post by my colleague Vinay Argawal.