The DRV8316 and MCx8316 families of 3-phase integrated MOSFET BLDC motor drivers include an up to 200-mA adjustable buck regulator capable of outputting 3.3V to 5.7V. The buck regulator is designed into the 8316 family of motor drivers to provide an external logic-level power rail for devices such as microcontrollers while reducing the BOM size of external buck components needed. Depending on the amount of load current required, an inductive filter (LBK and CBK) or resistive filter (RBK and CBK) can be used which bring efficiency or power dissipation advantages. 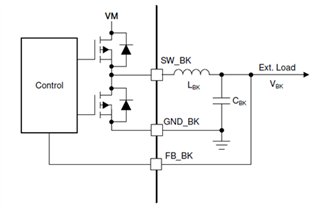 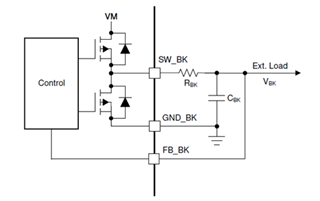 There are also configurations for buck protections, power sequencing, and current limits that can be set to improve performance and robustness of the buck regulator.

Depending on the efficiency of the buck regulator, the total buck power dissipation can be calculated through the following equation:

Resistor mode efficiency is negligible because power is dissipated through the external resistor rather than the buck, so device power losses and the junction temperature of the IC will decrease. Ensure the buck resistor is rated for the appropriate power by using the following equation:

No matter if the buck is used or unused, the buck components RBK/LBK and CBK must be populated or else a buck undervoltage (BUCK_UV) fault is reported and the nFAULT pin goes low. If using a hardware variant of the device, the buck regulator cannot be disabled, so it recommended to use a small 22-ohm RBK resistor and 22uF capacitor to reduce the BOM of the unused buck.

BK_GND can be connected to AGND if noise coupling from PGND is mitigated. For best performance, use a separate ground for BK_GND and connect to AGND using a low-inductance component, i.e. net tie or wide 0-ohm resistor. For instance, the DRV8316REVM connects BK_GND to AGND because there is noise separation between AGND and PGND.

For best performance, separate SW_BUCK and FB_BUCK nets with ground separation. For instance, 25 mil separation of grounding is used in the DRV8316REVM between the SW_BK and FB_BK nets. This reduces coupling from the SW_BK into the buck output voltage FB_BK. It is also recommended to make SW_BK and FB_BK as wide as possible to allow for faster load switching. 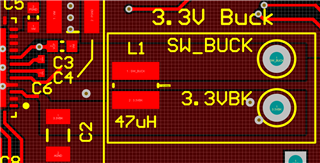