[FAQ] How do I configure the gauge to drive fewer than 5 LEDs?

Sometimes not all 5 LEDs supported by the BQ40Z50 are needed in your application. If the data flash is not configured correctly for any configuration other than 5 LEDs, it can cause a dim blinking of the LEDs due to the charlieplexing used to drive the LEDs. For 4 LED configuration it will cause LED1 and LED3 to blink slightly dimmer as the gauge attempts to drive LED5.

In order to avoid the dim blinking behavior, the CHG Thresh 5 needs to be changed to 101% so LED 5 never blinks during charging if the button is pressed or LEDCHG is enabled. Since the default BQZ file will not allow the data flash location for CHG Thresh 5 to be changed to a value over 100% it must be done manually in the advanced communication tab of BQStudio.

First make sure scanning and auto refresh are off in BQStudio, then follow the steps below to change the CHG Thresh 5 to 101%: 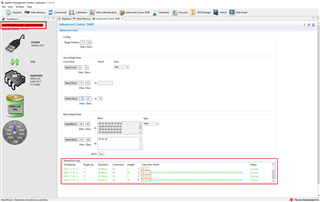 The same procedure must be followed with the DSG Thresh 5 in order to prevent dim blinking during discharge when the LEDs are displayed using the midpoint blink (BLINKMIDPT) feature, or having 2 dim LEDs when the BLINKMIDPT feature is not used and all 5 LEDs the gauge is trying to display all 5 LEDs.

Make sure to check the data flash address of the thresholds in the TRM or BQStudio to verify they are correct, in the example above the BQ40Z50-R4 was used.