In the second installment of this series, I briefly talked about the attenuation of frequencies due to the sinc3 digital filter. In this installment, I’ll quantify the theoretical degradation due to a sinc3 filter and talk about how the Multiphase Power Quality Measurement with Isolated Shunt Sensors Reference Design reduces this degradation when calculating total harmonic distortion (THD).

First, let’s begin by examining the equation of a typical sinc3 filter show in figure 1:

Figure 1: The equation of a typical sinc3 filter

Here fM is the delta-sigma’s modulation clock and OSR is the selected oversampling ratio. The effective sample rate of the sigma-delta converter is equal to fM/OSR.

From figure 1, you can see that the frequency response depends on the sample rate of the sigma-delta analog-to-digital converter (ADC). Figure 2 shows the degradation of amplitude for a given frequency to ADC sample-rate ratio. The waveform in Figure 1 covers a range equal to half of the ADC sample rate, thereby covering the entire set of frequencies that the ADC could sense. In figure 2, the waveform is normalized where the magnitude at each frequency is divided by the DC gain. 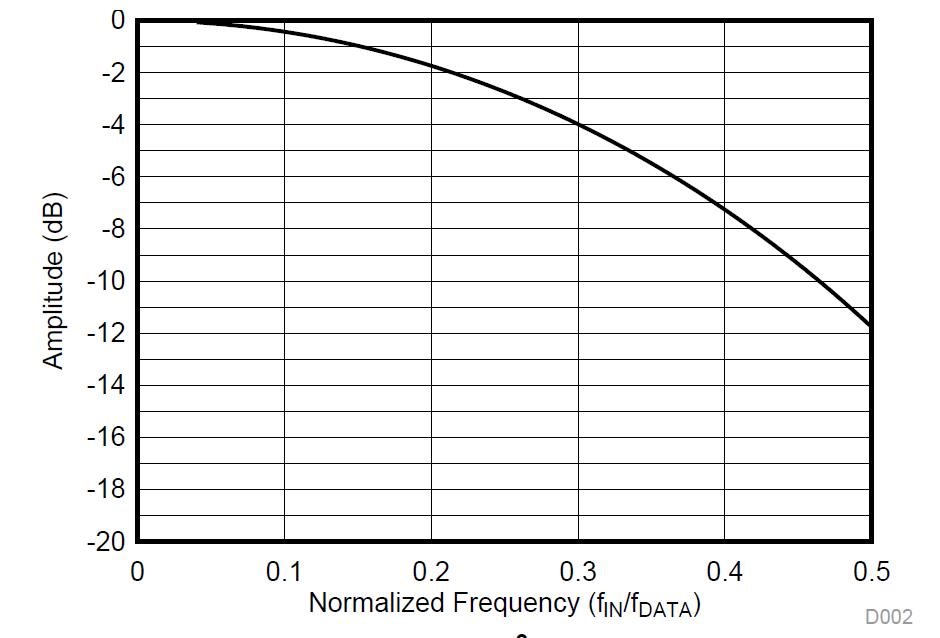 As an example of the attenuation from the sinc3 filter, let’s say that you have the following test conditions:

Applying the same test conditions but changing the fundamental frequency from 50Hz to 60Hz results in a fifth harmonic of 300Hz instead of 250Hz. The degradation in accuracy is worse than the 50Hz case. Specifically, these are the calculated parameter values:

From these parameter values, you can see how there is a degradation in the results due to the attenuation of harmonics caused by the roll-off of amplitude of the sinc3 filter at higher frequencies. This attenuation is worse when higher-frequency components are present, thereby resulting in less accurate results.

The Multiphase Power Quality Measurement with Isolated Shunt Sensors Reference Design demonstrates how to reduce the effects of roll-off of the sinc3 filter. This reference design uses a successive approximation register (SAR) ADC for measuring phase voltages. For many applications, a SAR ADC can measure voltages without requiring multiple gain stages, since a large dynamic range of voltage is not often required. By using a SAR ADC instead of a delta-sigma ADC with a sinc3 filter, there is no degradation of accuracy at higher frequencies caused by the converter.

For sensing current, the reference design uses the AMC1304M05 delta-sigma modulator with the MSP430F67641’s sinc3 digital filters. This modulator-plus-digital-filter combination can run with a modulation frequency as high as 20MHz. A high modulation frequency enables both a high OSR for accuracy and a high delta-sigma sample rate. The high delta-sigma sample rate has the benefit of reducing the magnitude of attenuation at higher frequencies as Figure 2 suggests, as it shows the degradation of amplitude for a given frequency to the ADC sample-rate ratio. In the reference design, the resulting delta-sigma ADC sample rate is 19,334 samples per second. Since not all of these samples are needed, one-fifth of the ADC samples for metrology calculations leads to a final sample rate of 3,866.8 samples per second.

Now let’s see how the attenuation is affected by the higher sampling rate of 19,334 for the fundamental frequency of 60Hz. Assuming the same fundamental and harmonic current conditions as before, here are the calculated parameter values: