This is a general doubt regarding the transmission line.

The below figure is an equivalent circuit of an open-ended transmission line. For finding the the voltage at V+ why the author used voltage division.

This is an open-ended transmission line so the voltage at V+ should be the open-circuit voltage Vg?

May I know where I went wrong? 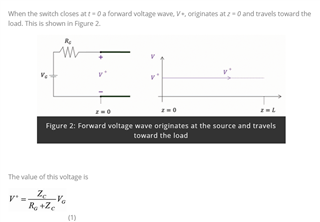