As a result of RTOS/TM4C129XNCZAD: Is there a way to reset Ethernet Phy and NDK? which describes an intermittent failure of Ethernet communication, created an Ethernet stress-test of TI-RTOS for TivaC 2.16.1.14 by using a modified tcpEcho_EK_TM4C1294XL_TI_TivaTM4C1294NCPDT example with changes to allow the data rate to be increased. When using four off tcpSendReceive programs with a data size of 4380 and zero delay the Tiva Ethernet is transmitting and receiving about 23 Mbits/second, but after a several seconds to tens of minutes the test stops due to the Tiva being unable to transmit Ethernet packets. Watching the 'EMACSnow.c'::EMACSnow_private EMAC driver statistics in the CCS Expressions view shows that Ethernet packets can still be received (rxCount and isrCount increment) but Ethernet packets can't be transmitted (txSent doesn't change and txDropped increments).

b) EMACSnow_hwiIntFxn() disables the interrupts.

d) EMACSnow_hwiIntFxn() calls Swi_post() to have the Swi handle the incoming packets.

e) EMACSnow_handlePackets() which is the Swi handler reads g_ulStatus to determine if to process the transmit and/or receive interrupts.

By investigating the cause of the test failure found a condition under which EMACSnow_hwiIntFxn() can be called twice before EMACSnow_handlePackets() is run which can lead to the failure. E.g. the sequence:

1) All four transmit descriptors are in use.

2) EMACSnow_hwiIntFxn() is called and sets g_ulStatus to 0x10041 meaning transmit and receive interrupts are pending.

3) EMACSnow_hwiIntFxn() is called again and there are no pending interrupts resulting in g_ulStatus being set to zero.

5) The transmit descriptors have completed their transmission, and the EMAC peripheral doesn't generate any more transmit interrupts.

6) Since the pending transmit interrupt from 2) has been lost EMACSnow_processTransmitted() is not called.

The following capture from Data Variable Tracing on the g_ulStatus shows the problem of a lost transmit interrupt occurring: 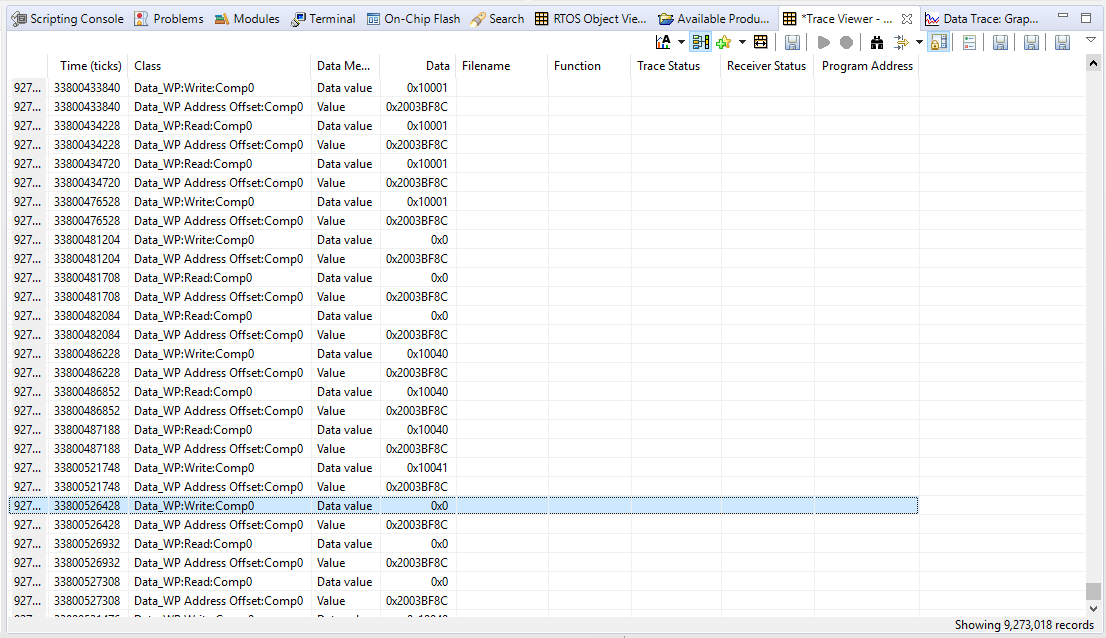 The modified TCP echo example which showed the failure is attached, and the readme file describes the changes made and investigation into the failure mode.7080.tcpEcho_EK_TM4C1294XL_TI_TivaTM4C1294NCPDT.zip