In the first few weeks following the devastating tornadoes that hit North Texas in late December 491 TI employees  and retirees generously donated more than $65,000 to help those affected by the storms. The TI Foundation’s grants and TIer donations brought the total contribution to American Red Cross North Texas relief efforts to more than $155,700.

“Once again, TIers showed what big hearts they have,” said Andy Smith, executive director of the TI Foundation. “The overwhelming response to help our neighbors is a true testament to TI employees’ and retirees’ passion to making our community a better place, and assisting those most in need.” 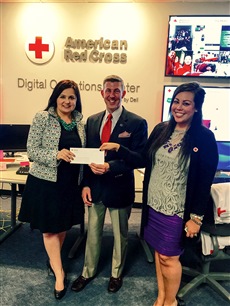 According to Red Cross, the severe storms and 12 deadly tornadoes that pummeled the Dallas area the day after Christmas resulted in power outages and significant storm damage - particularly in Ellis, Dallas, Collin and Rockwall counties. As of today, 1,100 damaged homes in the area have been deemed unlivable.

“From preparedness to response to helping people recover, thanks to your support, the Red Cross is there every step of the way for those affected by disasters,” said Ashley Walsh, Senior Corporate Relations Officer American Red Cross North Texas Region

“Many thanks go to the TI Foundation and to the TI employees and retirees who continue to make a difference in their communities.  Your dedication to giving back and getting involved is evident.”