Bike to Work Day 2015 dawned cloudy in Dallas, with a threat of rain. But that didn’t deter Jason Mechler, an IT technical architect, from towing his daughter to school in a bike trailer then riding to his office at RFAB in Richardson. Jason, who tries to ride to work a couple of days each week, travels about 12.5 miles to the school, the office and back home.

Jason was one of more than 350 TIers around the world who rode two wheels to work on international Bike to Work days. In all, TIers traveled 4,100 miles (6,700 km) on their bikes to boost their health, save fuel and reduce emissions.

Muamba Muanankese, a test systems engineer, also braved the threatening weather in Dallas to ride 20 miles roundtrip to the Dallas Support Building on TI Blvd. His route included the White Rock Creek trail and the Cottonwood trail, which was completed through vision, funding and effort from TI in collaboration with Dallas County (read related article). 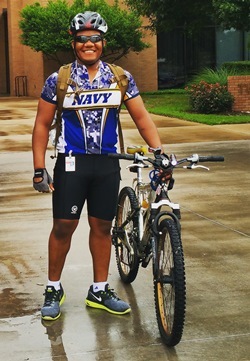 In Bangalore, as part of TI India’s 30th anniversary celebration, TIers were encouraged to ‘Pedal your way to work and help reduce our carbon footprint.’ More than 150 TIers took the message to heart and rode to work, then took a spin around Bagmane Tech Park, where TI is located, helping spread the message to corporate neighbors. Even TI India’s managing director, Santhosh Kumar, joined in to lead by example, contributing to almost 1,500 km covered by the cyclists.

“TI has a strong history of environmental stewardship and works to continuously improve environmental efficiency at its sites worldwide. As we celebrate 30 years of operations in India, we are even more committed to minimizing our carbon footprint, use of energy, water, and other resources,” Santhosh said. Read more in an article published by the Bangalore Mirror. 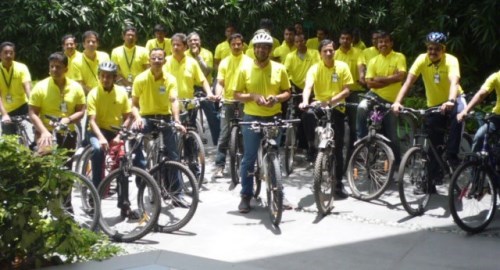 Although the Oslo, Norway site is a small development facility for Low Power Radio Frequency (LPRF), with only about 89 people, their Bike to Work participation is huge! More than 50 percent of the site’s population cycled a staggering 1,920 km (1,200 miles) altogether. Roger Johnsen, a program manager for LPRF, contributed most to the total miles by riding from his home in Sarpsborg for a roundtrip total of 161 km (100 miles).

Some riders took the opportunity to meet up early in the morning and bike together to work via trails in the forest around Oslo; others formed small teams cycling longer distances on the roads.

“Bike to work has become a tradition in TI Norway,” said Trygg Eliassen, program manager and local cycling coordinator. “Cyclists receive a snack when they arrive - some nuts, fruit, sports drink, etc. And funny diplomas and prizes are given out to worthy winners in a small gathering the following week. We hope more TI sites and people would like to join in this fun and social event.”

Kuala Lumpur, Malaysia, another site with a long history of Bike to Work Day participation, continued the trend with 60 riders.

Forty-one employees from the Chengdu, China site biked in from five directions, with a coordinator from each group to support the ride.

Cyclists at the Baguio, Philippines site paused for a quick photo at the TI entrance. 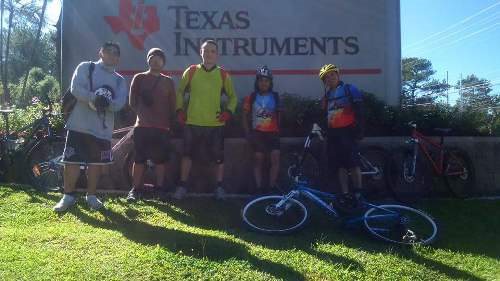