RF communication started as simple automated meter reading (AMR) in Central Europe a decade ago, replacing the high effort, very costly manual read-out of water meters and heat cost allocators in millions of houses and apartments, providing multiple benefits to both end users and utilities at the same time. Customers no longer needed to stay at home waiting to let a utility employee in, who would read out the meters in their apartment; and the utilities gained a continuous access to the metering data, enabling them to provide exact billing and quickly identify meter device fails or device tampering in the field. On top of this, a significant cost savings for the utilities have been achieved by dropping the manual read-out effort and by implementing automated billing system solutions, instead of error-prone manual data collection and entry.

All Sub-1 GHz RF communications in Europe is regulated by the European Telecommunications Standards Institute (ETSI) 300 220-1 V2.4.1 (May 2012), defining which short range devices (SRD) radio devices with power levels of up to 500mW can be used in Europe in the 25 MHz to 1000 MHz frequency range. A few years ago a new ISM narrowband of just 75 kHz suited for meter reading applications at 169.400 MHz was added to the previously available 868 and 433 MHz license-free ISM bands in ETSI 300 220. The maximum transmit power permitted in this 169 MHz band is +500mW (equals +27dBm) and the allowed duty cycle is ≤10%. The required channel spacing is 50kHz or less; LBT (listen before talk) or AFA (adaptive frequency agility) channel access may be used, but both are not mandatory.

The European wireless metering bus (wM-Bus) standard (based on the European EN13757-4 and also -3 and -5 norms) was first introduced a decade ago as a European solution for automated meter reading (AMR). The wM-Bus protocol meanwhile has become the foundation for both the OMS (Open Metering Specification) and DSMR (Dutch Smart Meter Requirements) suite of technical documents, which define the system architecture and implementation of smart metering respectively for Germany and The Netherlands.

Both OMS and DSMR use wM-Bus at 868 MHz (typically the “legacy” T- or S-modes, with the newer C-mode being introduced as well) and can be viewed as a home area network, due to the relatively low maximum transmit power levels of +14dBm (=25mW) effective radiated power (ERP). Due to the limited wireless range inside buildings of some 10s of meters, these wM-Bus modes are used in a fixed network where a data collector unit typically serves may be 10 to 100 wM-Bus enabled (sub-) metering devices. In addition, a drive-by readout is also possible, especially with the T- and C-modes, which may transmit data as often as every 8-10 seconds. This solution has been widely deployed in Germany, where millions of wM-Bus enabled heat cost allocators and water or heat meters supporting T- and S-modes are already in use with many more being installed. 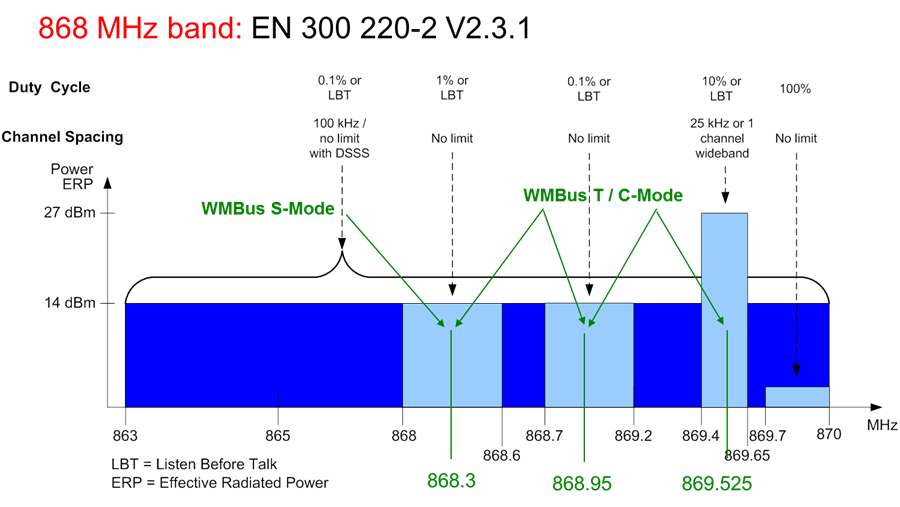 Data collectors in T2 and S2-modes transmit at 868.3MHz with maximum +14dBm and in C2-mode with up to +27dBm at 869.525MHz, utilizing the much higher available power limit and duty cycle in this sub-band (see Figure. 1). Obviously, having a +27dBm radiated power low-cost RF link at 869.525MHz will deliver a superior range coverage in the direction to the meter (or downlink) or between two data collectors.

TI’s RF and MCU solutions have been at the heart of wM-Bus development since 2006, when the Sub-1 GHz CC1101 RF transceiver was released and got integrated in the world’s first wM-Bus RF modules (see [1]). Later on, the high performance CC112x family in the Sub-1 GHz range was introduced, which significantly improved all parameters in wM-Bus modes and still sets the bar for RX sensitivity, selectivity and blocking performance in the market as documented in [2]. Based on the Sub-1 GHz CC12x family of devices TI has recently published several TI Designs, demonstrating how easy it is to add a wM-Bus RF sub-system to a meter (TIDC-WMBUS-868MHZ and TIDC-MULTIBAND-WMBUS), combining a ultra-low-power MSP430™ microcontroller that runs the protocol stack with the CC112x RF transceiver and dedicated battery power management, such as ultra-low Iq DC/DC TPS62730 or TPS62740 or TPS62745.

These TI Design reference designs address various end-equipments of the smart grid infrastructure, consisting of end nodes (or Smart meters) and gateways, like data collectors and mobile data readers, enabling customers to develop state-of-the-art products, with 20+ years of battery lifetime. Large scale roll-outs of smart meters and data collectors or communications hubs will happen in the next five years, as all European countries are focusing their efforts to introduce smart energy systems, as mandated by the European commission. Please, check out the part 2 and part 3 in this series to learn more about wM-Bus RF solutions.