Part 1 of this blog series reviews the wM-Bus protocol standard in the 868MHZ ISM band in Europe, while Part 2 looks at the wM-Bus N-modes and ETSI Category 1 receiver performance. This time let’s see how a real world wM-Bus sub-system, either an embedded solution or a stand-alone RF module, is designed nowadays and what is the next generation solution.

When designing a wM-Bus solution, regardless if implementing a wM-Bus module or embedded RF sub-system, the first decision to be made is where the wM-Bus stack should run. It could be either on the main metrology microcontroller (MCU) or on a separate MCU, which is dedicated to the protocol stack only. The pros of merging the RF protocol stack and the metrology functions on the same MCU include:

But there are also cons to this single MCU approach:

Regardless if one or two MCUs are used, a wM-Bus subsystem will need a MCU for the stack (and possibly for the application and/or the metrology code) with a RF device, compliant to the respective wM-Bus mode. TI is offering a huge variety of ultra-low-power MSP430™ MCU devices, which have FRAM MCUs, to run the wM-Bus stack when combined with the high-performance CC112x family of RF devices. On the other hand the sheer number of combinations (hundreds of MCUs and six RF devices) makes stack adaptations necessary for each of these options. Different SPI interfaces, varying reset and interrupt lines and GPIO connections between MCU and RF have to be considered each time a new solution is being designed, which increases the design effort significantly.

The introduction of SimpleLink™ Sub-1 GHz CC1310  wireless MCU will eliminate the hardware variations without sacrificing the RF performance in wM-Bus modes. Three different QFN packages (4x4, 5x5 and 7x7 mm) enable numerous applications such as heat cost allocators, water and heat meters and RF modules, based on the number of GPIOs required by the customer’s application. For a wM-Bus RF sub-system (both meter and data collector functionalities), where only an UART connection and a few other lines are needed, the 4x4 package is an excellent fit and enables a true single-chip wM-Bus sub-system or RF module. A single integrated passive component (IPC), as already available for CC112x (see here), could make such CC1310-based solutions even more attractive and enable smaller wM-Bus compliant modules for 433 and 868 MHz bands.

Yes and No, depending on which wM-Bus Mode and device functionality is required and which parameters are most important for a particular product. 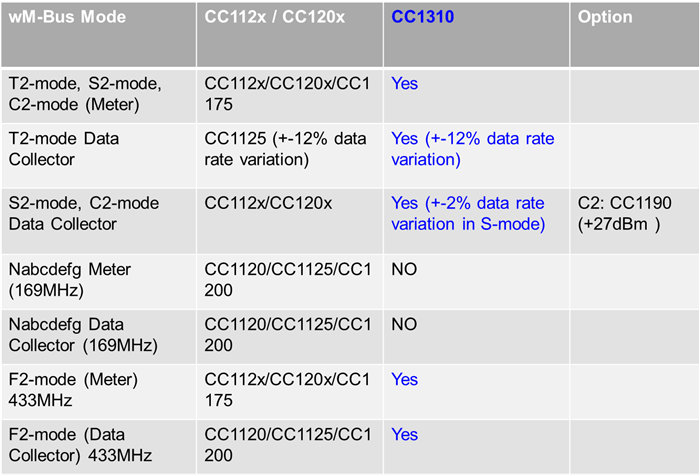 RX sensitivity and blocking are comparable for the 868MHz band but CC1310 excels in terms of current consumption due to its power efficiency. Drawing only 5.4 mA in receive mode and 22.5 mA @ +14 dBm transmit current (conducted measurement) at 3.6 V supply, the CC1310’s total power consumption (voltage U * current I and the voltage stays unchanged), is 75% less in receive mode and 50% less in transmit operation compared to the CC112x family. This huge power savings reduce the system cost by enabling the usage of both smaller sized batteries and buffer caps at a lower cost.

The 3rd and also very important operational mode (in addition to receive and transmit) is the sleep or power-down with a Real Time Clock including full RAM state retention – here current consumption is just 650 nA, which is comparable to the combined sleep current of many ultra-low power MSP430 device families with a CC112x/CC120x radio in power-down mode.

With up to 128 KB Flash memory and 20 KB of RAM, there is plenty of room to combine the wM-Bus stack and the application code in a single device. With its market leading ultra-low power consumption, paired with excellent receiver sensitivity, selectivity and blocking performance, the new CC1310 wireless MCUs is a perfect fit for a high number of applications and products, such as water- or heat meters, heat cost allocators, consumer displays and wM-Bus RF adaptors to name just a few.

The final blog in this series will talk about the power solutions for Sub-1 GHz RF systems, stay tuned for Part 4.