The proliferation of nonlinear electric loads is threatening electric grid reliability in industrial, commercial and residential premises. What are nonlinear loads? They are any piece of electric equipment whose impedance changes with applied voltage. Examples in industrial applications include large variable-frequency motor drives or high-current arc welders. Switched-mode power supplies in server farms, office equipment and all types of consumer electronics are also nonlinear loads.

When these current and voltage harmonics occur, they can damage other electric equipment plugged into the grid, at both the utility and other electricity consumers. It is therefore the responsibility of electricity providers and large energy consumers to minimize the impact of nonlinear loads and their associated harmonics. The first step toward this is to monitor the grid for the presence of harmonics. Adding total harmonic distortion (THD) measurement to energy meters is a good place to start. 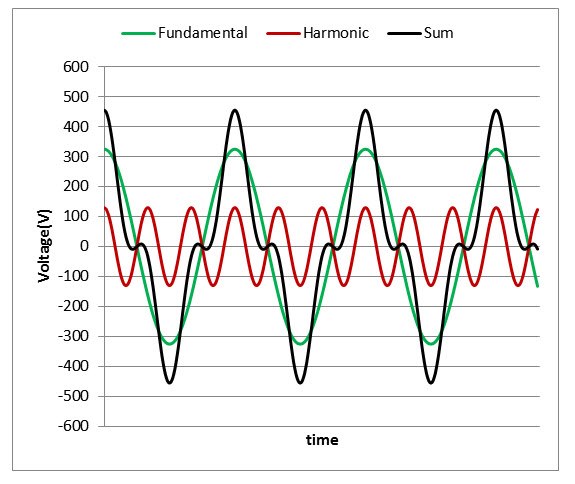 When harmonics are present in the voltage and current, you can take the corresponding root-mean-square (RMS) measurement by using the waveform samples of the resultant waveform (as an example, the black waveform in Figure 1) and plugging it into the standard RMS equations, Equations 1 and 2: 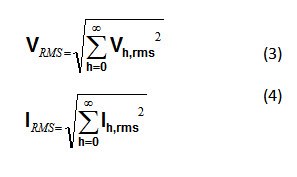 You can calculate the THD parameter as a measure of the total harmonic content in a signal. There are two common definitions of THD. In the first definition, as defined by IEC 61000-4-7, THD is the RMS value of the sum of all harmonic components (Vh,rms for voltage, Ih,rms for current) up to a specified order (N) to the RMS value of the fundamental component (V1,rms for voltage, I1,rms for current). Equations 5 and 6 are the formulas for voltage and current THD, respectively: 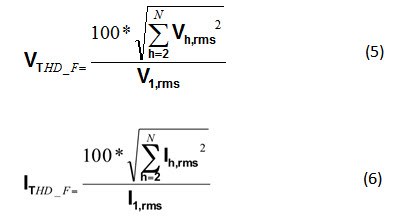 This definition of THD is more common in energy measurement systems and may result in a THD value that is above 100% when the contribution of the fundamental signal is less than the total contributions of the other harmonics. 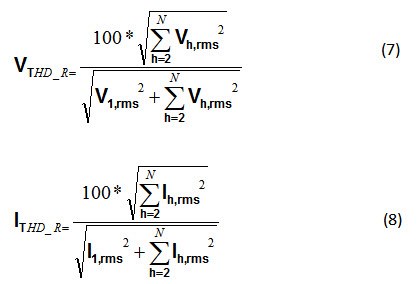 For the second definition of THD, the value will always be less than 100%, since the total RMS value is used as the denominator instead of just the fundamental RMS value.