We were working on TI’s WL1807MOD wilink8 module. The module is working fine in station mode when clock frequency is 50MHz,( i.e when it supports the high-speed mode). In AP mode, we are able to connect to the AP , but the DHCP server is not able to receive DHCP request packet from the connecting station, though the DHCP offer is sent from the module. But when we changed the frequency to 25 MHz ( i.e disabled the support for high-speed mode), then the DHCP server is working fine in AP mode. We are able to receive DHCP request  and DHCP ack packets. But later, we see so many retransmission packets receiving in the wilink module.

Initially we suspected either it was a power supply or calibration issue. Inorder to confirm that there is no power supply issue we had tried by adding one 100uf capacitor at the 3.3V supply of the wifi chip. But still same behaviour. The DC/DC converter generating 3.3V is capable of delivering 3A and we did the load regulation test upto 2A for the same. We don’t think that the issue might be due to power supply or calibration. If it is power supply issue we will not be able to connect it and calibration issue normally create range problems. Since we are testing with device close to each other calibration issue will not affect. We had captured all the data lines and clock. To reduce the overshoot & undershoot we had added different values of termination resistors , waveforms smoothened but there was no change in the behaviour. The rise & fall time, delay between clock & data lines are less than 1ns.

We have attached the logs taken using gLogger app for the chip in AP mode in both frequencies.  We are not able to make out why the DHCP server is not working in 50MHz. Could you take a look at the logs and understand why could be that the DHCP server doesn’t work in 50MHz frequency and in 25MHz frequency, lots of retransmission packets are received? Schematic details are also attached 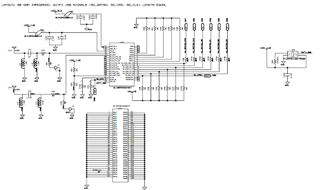